Digital Jesters launches its website to the hugely-anticipated Freedom Force Vs The Third Reich. 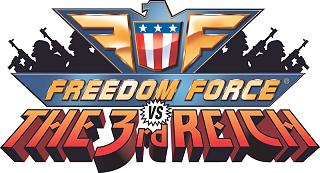 British publisher Digital Jesters has scooped the rights to Freedom Force vs The Third Reich, beating off stiff competition with the support of French publisher Focus Home Interactive in a co-publishing deal that will see Irrational?s highly anticipated sequel hit stores across Europe in Q2 2005 for the PC.

Y-fronts-over-tights fans can find out more by pointing their browsers at http://www.freedomforcegame.com to find somewhere that will offer significantly different content to the popular official Irrational site including 12 part series of the soon to be released Freedom Force animation.

Developer Irrational Games? Freedom Force Vs The Third Reich is the sequel to the critically acclaimed and award winning Freedom Force, and promises to be build on the successes of the original with a new plot, new characters, and perhaps most importantly, a brand new 3D graphics engine (Gamebryo).

Strongly identified by its faithful adherence to the 1960s style of comic book, The Third Reich will offer no less than six new heroes, who will join the cause against their evil counterparts, the six new super villains. Witness the birth of Tombstone! In a thrilling short movie, downloadable from the site.

?We are delighted to be able to provide another port of call for the hugefanbase of the world of Freedom Force,? says Terry Malham, financial director, Digital Jesters, ?We are delighted to be working with Focus on such a highly anticipated title, and are looking forward to bringing it to the European public.?

Once again, the website?s URL is http://www.freedomforcegame.com