SNK fights Capcom in its own world

Chaotic confrontation pits Kyo and Ryu against one another once more. 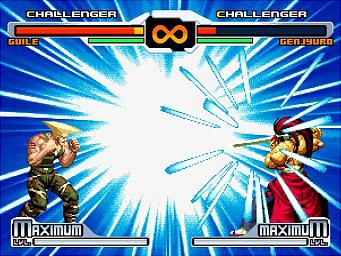 All Images (3) »
The world?s two greatest fighting games battle it out once again, as Ignition Entertainment brings SNK?s fight against Capcom to Xbox and PS2. SVC Chaos will be available, Jan ?05 with a SRP of Ł19.99. Fully Live compatible on the Xbox, SVC Chaos allows players to take on opponents from all over the globe.

Several years ago Capcom made a fighting game that took some of SNK?s favourite characters out of their home environment and placed them in the world of Street Fighter. With the inclusion of different playing styles within one title, the Capcom vs SNK series made a valiant attempt to bring the SNK fighters to life. The addition of another two buttons to make Kyo and Iori more like Ryu and Ken was deemed necessary, but was a major factor in the title showing its developer?s roots.

Featuring playable characters from some of SNK and Capcom?s most popular franchises ? which include King of Fighters, Fatal Fury, Samurai Showdown, Dark Stalkers and Street Fighter ? SVC Chaos brings together fighters from across the years to duke it out in a brand new fighting system. Designed by SNK, and with a range of different ways to move around, guard and break guard, SNK?s latest home console title offers a dynamic battle experience that feels at once comfortable and yet new. Charge up the power gauge to use new systems like the ?Guard Cancel Front Step? and ?Guard Cancel Attack?, along with the ?Anywhere Cancel?. The new Exceed Move offers another level of depth for knowledgeable players.

?SVC Chaos draws on a range of SNK titles, while keeping many of the favourites in the game,? says Peter Rollinson, Product Manager, Ignition Entertainment. ?The mixing of fighters from different SNK titles is itself an exciting prospect, and the inclusion of Capcom?s finest makes this a worthy addition to the on-going saga that offers players the best of both worlds.?