Ubisoft brings Rainbow Six into darker territory, to be released in spring 2005. 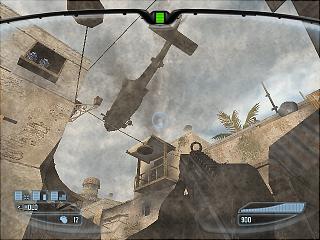 All Images (2) »
Ubisoft, one of the world's largest video game publishers, today announced its plans to launch a new Tom Clancy's Rainbow Six opus on PlayStation 2, Xbox and PC during Spring 2005. The game is being developed by two of Ubisoft's award-winning studios: Red Storm Entertainment, the maker of the original Rainbow Six, & Ubisoft's Montreal Studios.

In this new episode, you lead Team Rainbow, the world's most elite counter-terrorist unit, as they are called into action and unfamiliar territory to battle a bioterrorist threat. Stakes escalate as they are personally targeted by an evil terrorist organization. Used to protecting the lives of others, Team Rainbow must now embark on a mission to fight and save some of their own.

The next Rainbow Six installment will build on the ingredients that have made the Rainbow Six franchise a runaway success, and will introduce new single player experience with a personal darker storyline, state-of-the-art equipment, and offer gamers the chance to play as two members of Team Rainbow: Ding Chavez, the fearless leader of Team Rainbow, and a new sniper role portrayed by Dieter Weber, who must cover his team's movement with deadly accuracy.

The Rainbow Six franchise, which has already sold more than 7.5 million units, is critically acclaimed for its multiplayer games modes and enjoyed an unprecedented year as one of Xbox Live's top titles. Multiplayer modes will return with enhanced features. Additionally, PlayStation 2 and Xbox versions will get new & amazing exclusive modes that will bring the multiplayer experience to a further level of excellence.

"With the Rainbow Six franchise hailed for its immersive single-player games and known as one of the best multiplayer experiences, our studios managed to fully optimize the next Rainbow Six on Playstation 2 for a breathtaking mix of fun and beauty. This new opus will also take the best and make it better: this time it's personal as Team Rainbow becomes the target. Tom Clancy's gut-wrenching tension, pulse-pounding action, close-quarter battle and hallmark realism are about to get a whole lot darker", said John Parkes, Director of marketing for EMEA Territories. "This new episode will deliver an even bigger multiplayer punch on all formats, with the addition of revolutionary modes that take the game in a completely new direction".