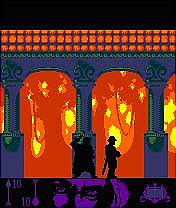 All Images (5) »
Eidos, one of the world?s leading publishers and developers of entertainment software, announces a mobile phone version of the critically acclaimed Thief: Deadly Shadows.

Originally released on PC and Xbox in summer 2004, the mobile version has been developed by IOMO for Java and BREW-enabled handsets. The game will be released in two parts, starting with Episode I in January 2005, with Episode II following soon afterwards. Thief: Deadly Shadows will be available to download through network operators worldwide.

In Thief: Deadly Shadows you take on the role of the master thief Garret in a series of deadly missions. Use the shadows of the medieval city to your advantage as you sneak past adversaries and steal precious items while trying to avoid detection. To aid your quest you have a wide-range of weapons, including bombs, fire arrows, noisemaker arrows and water arrows. The game also features a unique lock-picking mechanic using handset vibration.

Simon Protheroe, Eidos? director of new media and online technologies, says: ?The announcement of a mobile phone version of Thief: Deadly Shadows is further testament to Eidos? proven ability to bring its key franchises to the world?s biggest gaming platform. The game is a great addition to our mobile games portfolio and we are delighted with the great work IOMO has done in capturing the essence of the Thief series on a mobile phone.?

John Chasey, managing director of IOMO says: ?Mobile phones have proven themselves to be a viable and capable games platform in 2004, bringing a new dimension to titles which have appeared on consoles and reaching an ever growing audience and introducing even the most sceptical to the joys of gaming. Thief: Deadly Shadows is a complex and sophisticated title to bring to mobile phones while retaining the gameplay and atmosphere which made the original game so popular, but we think the important elements have translated very well and look forward to bringing Garret's adventures to a whole new audience.?
Companies: Eidos IOMO
People: John Chasey Simon Protheroe
Games: Thief: Deadly Shadows