Once, Twice, Three Times a Lawyer 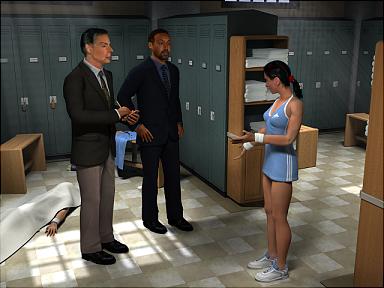 A beautiful young tennis star is murdered just before the start of the US Open Championship and the Police Department is called in to investigate. In Law & Order: Justice Is Served, this is where you come in as you take part in one of TV's most acclaimed police procedural and legal drama series, Law & Order.

Mindscape is publishing Legacy Interactive's PC game based on the characters and action from Law & Order. The storyline for the interactive version is original however, and written by one of Law & Order's regular screenwriters, with actors from the series, notably Jerry Orbach, Jesse L. Martin and Elisabeth Röhm, lending their voices and likenesses to the game. The TV series ? and the game ? is unique in that the action isn't confined to detection, or the courtroom procedures, but both. Here you will need to control the detectives assigned to the case to fin the killer and then the district attorney's offices, bringing the accused to trial.

"Law & Order has won a deservedly loyal following in the UK ? it's a high quality crime and legal drama, and Legacy has taken the same care over its production values in the game," says Paul Howes, general manager of Mindscape. "We think that a 'thinking person's' title like Law & Order can provide a welcome change to the fast action games that are perhaps aimed at a younger audience."