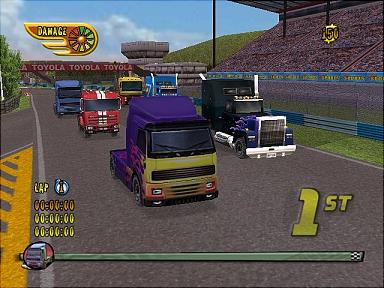 Monster Arenas lets players choose from a selection of eight seriously hardcore, V12-powered Monster Trucks and burn their way around the four totally extreme race tracks inside massive grand stands that host the fiercest and most monstrous truck races known to man!

Tear around the custom-built super-stadiums filled with jumps, mega-bumps, tunnels and bridges, and then unleash your nitro canisters and hold on tight as you fly past your opponents at break-neck speed.

Monster Arenas utilises an ultra-realistic physics system to ensure every bump, nudge, crash and crunch on the race track affects your vehicles as it should, so you can hit, crash and smash into other drivers and see them flaming off the road in an inferno of twisted metal.

If you race well and claim victory against your opponents to earn prize money, you can unlock extra Trucks and race in secret night stadiums under the glare of huge roof-mounted floodlights!

You can take on your friends in the frenzied multiplayer mode; get the fastest lap in time trial or go for the Gold Cup in the Grand Prix challenge. Monster Arenas has it all!

Its time to drive some real monster machines, because this is the super-charged turbo-driven world of Monster Arenas.
Companies: DDI Phoenix Games
Games: Monster Arenas