Prodding animals has never been so much fun. 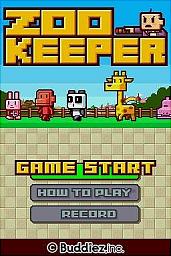 Ignition has secured the rights to publish Zoo Keeper across Europe and North America, a puzzler from developer SUCCESS Corporation that will be one of the first Japanese launch titles for Nintendo?s highly anticipated new handheld video game system ? the Nintendo DS.

Using the Touch Screen, players tap the Nintendo DS stylus to swap the positions of animals on screen to create lines of three or more of the same type. These animals are then ?captured?, allowing other animals to fall into their place. This easy to pick-up and intuitive system is complimented by a unique look designed by the popular the Japanese developer.

Zoo Keeper includes a variety of play modes to ensure gamers have depth of gameplay. Players can also take advantage of the DS Wireless Communication to play simultaneous two-player modes that only requires one Nintendo DS Zoo Keeper Game Card

?Zoo Keeper is perfectly suited to the Nintendo DS, with its use of both the Touch Screen and the wireless communication capability,? says Peter Rollinson, Product Manager, Ignition Entertainment. ?Its simple yet addictive gameplay will appeal to young and old alike, much like the Nintendo DS itself surely does.?

?Ignition is a small but focused team of passionate gamers who have shown an ability to cherry pick quality games,? adds Mr. Yoshinari, President of SUCCESS. ?And we are delighted to be given the chance to work with such a team.?