Data Design Interactive has a Kick Around in the Park

Soccer for little people on the way. 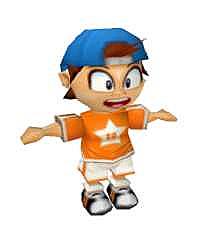 Kidz Sports 11 & 5-A-Side Soccer available on Playstation 2 platform lets the player challenge an AI team or play head-to-head against a friend. Good play generates SKILL points that allow team members to pull-off spectacular cartoon-style special moves, such as jumping over other players, scoring from the half-way line, and or dribbling past all the opponent?s defenders.

Single play mode also offers a knock-out Cup, league where every team play?s every other team, and the one with the most points at the end comes top.

Kidz Sports 11 & 5-A-Side Soccer is a fun game based on kids playing 5-a-side soccer in the park and brings together the fun of a group of friends playing together as in real life, and adds in extras like super-speed, and guaranteed shots to spice it up.