PlayStation 2 game based on legendary Japanese Anime comes to Europe in 2005. 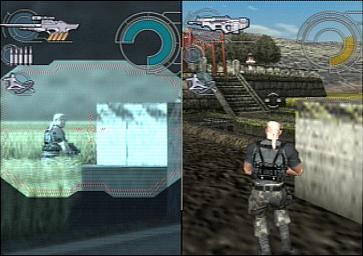 All Images (3) »
Bandai and Atari announce the European release of Ghost in the Shell: Stand Alone Complex, the PlayStation 2 game published by Bandai based on the world famous Japanese anime series. The game is a high octane third person action shooter set in a vast gaming world faithful to the original anime TV series. Following the Japanese release of the game in March 2004, the fully localised version is slated for European release in March 2005.

Ghost in the Shell: Stand Alone Complex puts players in the shoes of one of 3 characters from the series; Major Motoko Kusanagi, Bateau, or the Tachikoma spider tank. The story begins when Major Kusanagi and Section 9 officer Bateau are sent on a mission to shatter the illegal arms trade of a fearsome terrorist organisation, gradually unveiling a dark conspiracy.

The ability to hack into the minds of enemy?s brain and temporarily control them lets players launch devastating attacks from within the enemy ranks and makes for incredibly original gameplay. Laying waste to an unsuspecting host of opponents by controlling the mind of one of their own kind is an exhilarating experience, and even when they realise and gun their assailant down, the connection simply closes and control reverts to the player?s chosen character who remains completely unharmed.

?The Ghost in the Shell universe is an incredible setting for a video game, and fans of the anime and keen action gamers alike will find Bandai?s Ghost in the Shell: Stand Alone Complex a thoroughly absorbing experience,? said Martin Spiess, Senior Vice President of Marketing, Atari Europe. ?The gorgeous visual presentation and original electronic musical score create a really intense atmosphere, and hacking into the minds of enemies and machines to control their actions adds a thoroughly new and engrossing dimension to the gameplay.?

The game has been designed to appeal to all fans of action games as well as devotees of the Ghost in the Shell franchise. The engaging single player story mode drops players quickly into the heart of the high-kicking action. Gameplay is fluid and beautiful, with moves and combos drawn straight from the anime series and stunning slow-mo graphical presentation of killer moves.

Over the 12 levels in the game, players will undergo the mission using an arsenal of 15 different kinds of weapons, including sniper rifles, sub-machine guns and missile launchers. Deathmatch and co-op multiplayer modes allow up to 4 players to battle it out in split-screen over 7 exclusive maps. Completing the story mode will unlock a host of hidden features, and 10 levels of difficulty will ensure a tough fight for even the most experienced gamers.