Eidos and Macrospace Team up for Crash ?n? Burn Turbo

Due for BREW, Java and i-mode phones. 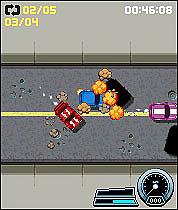 Eidos, one of the world?s leading publishers and developers of entertainment software, and Macrospace, the global provider of mobile games and mobile gaming services, announce a deal to bring Crash ?n? Burn Turbo to mobile phones.

Under the terms of the agreement Macrospace will publish the mobile phone version of Eidos? forthcoming arcade-style driving game Crash ?n? Burn. In partnership with Eidos, Macrospace will actively promote the mobile title across all geographies and handset technologies, with versions of the game planned for Java, BREW and i-mode phones.

Crash ?n? Burn Turbo is a fast and furious driving game where the aim is not just to win races, but to survive them. Choose your car, personalise it, and then attempt to leave your opponents trailing in a cloud of nitrous smoke over 16 different street circuits. You can also compare your fastest times against players around the world. Crash ?n? Burn Turbo will be released in November, simultaneously with the PlayStation 2 and Xbox versions of Crash ?n? Burn.

Kristian Segerstrĺle, head of products and services at Macrospace says: ?The chance to develop the mobile version of such a stunning console title is a great win for Macrospace, and working with such a great company as Eidos has been a really positive experience. Creating mobile games in tandem with console titles creates a unique opportunity for adding to the overall game experience. Through Macrospace?s mobile expertise and Eidos? proven strength in the console and PC space, gamers can be sure that they will be getting a fantastic game to play, whatever the platform.?

Simon Protheroe, Eidos? director of new media and online technologies says: ?Macrospace has done an exceptional job in recreating the excitement of the console version of Crash ?n? Burn on a mobile phone. With the compelling gameplay on offer, coupled with Macrospace?s exceptional distribution reach, we are confident that Crash ?n? Burn Turbo will be a big hit with mobile gamers.?
Companies: Eidos
People: Simon Protheroe
Games: Crash 'n' Burn