Lucky we don't have a picture editor - look at this lot! 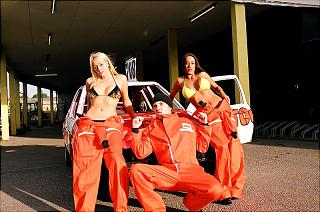 All Images (7) »
In addition to wide-ranging marketing activity ? including a highly controversial TV advertising campaign - Empire Interactive held a slightly different launch event earlier this month for their eagerly-awaited destruction-derby style driver, Flat Out, inviting over 20 journalists from motoring, lifestyle and specialist magazines to compete at the 2004 Stock Car World Championships held at Wimbledon this October.

Paul Benjamin, Marketing Manager at Empire, commented: "This was certainly a launch event to be remembered. The smart money was on the specialist press ? as all those hours put in playing Flat Out must pay off. And we had prepared for pretty much every eventuality - as you'll see from the pictures of the Flat Out Fillies Roadside Assistance team."

Paul's predictions were indeed correct, as winners on the night (well, those who didn't total their cars until the last race) included PC Zone's very own Steve Hill ? who finished in glorious style with a 50mph head-on crash into a wall ? and James Ashton of Official Xbox Magazine.