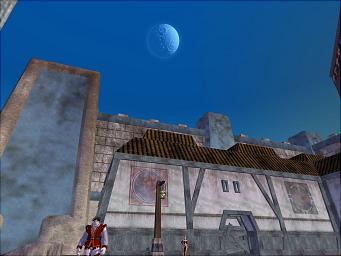 All Images (3) »
Ubisoft, one of the world?s largest interactive video game publishers, and Sony Online Entertainment Inc. (SOE), a worldwide leader in massively multiplayer online (MMO) gaming, today announced that lengendary British actor Christopher Lee and Hollywood star Heather Graham have been cast to lend distinct character and voice to the two main characters of EverQuest II. Mr. Lee and Ms. Graham bring their high-profile acting talents to this revolutionary project which encompasses more than 130 hours of spoken dialog, the equivalent of more than 65 feature films worth of content.

?The voiceover component of EverQuest II is a huge project that has already raised the bar for future MMO games,? said John Smedley, president, Sony Online Entertainment. ?Christopher Lee is an icon in the entertainment industry, having been a part of some of the greatest fantasy and science fiction franchises in history, and he has truly brought Lucan D?Lere to life. Heather Graham embodies the spirit of fantasy, giving life to Antonia Bayle, the leader of the forces of good. Both deliver compelling performances for our players that blur the line between blockbuster Hollywood films and interactive gaming.?

Mr. Lee is a legend in the entertainment industry, having appeared in more than 200 films, including recent memorable turns in Star Wars Episode II: Attack of the Clones and The Lord of the Rings. In EverQuest II, Mr. Lee will provide voiceover for the character of Lucan D'Lere, the 1000-year-old overlord of the evil city of Freeport. In a recent voiceover session, Mr. Lee described the character of Lucan D'Lere: "He is an overlord, he is a tyrant, he is a dictator, and he is immortal." EverQuest II players can look forward to more than four hours of dialog from Mr. Lee in the finished game when it is released later this year.

Ms. Graham has appeared in more than 40 films, including such hits as Austin Powers: The Spy Who Shagged Me, From Hell, and Boogie Nights. Ms. Graham provides the voice for Antonia Bayle, Queen of Qeynos and leader of the forces of good in EverQuest II. At the voiceover sessions in Los Angeles, Ms. Graham commented, ?What's cool about EverQuest II is that it's an interactive experience where you are the hero in your own personal adventure.? Ms. Graham?s character delivers approximately 300 lines of dialog in EverQuest II.

Featuring more than 70,000 lines of dialog spread across over 1,700 voice actors, EverQuest II is setting a new standard in immersion for the MMO genre. As new quests are added to the game after launch, the voice library will continue to grow as the game sets the pace for the future of MMO gaming. EverQuest II is scheduled for a simultaneous release in North America and Europe later in the year.
Companies: Ubisoft
People: Christopher Lee Heather Graham
Games: EverQuest II