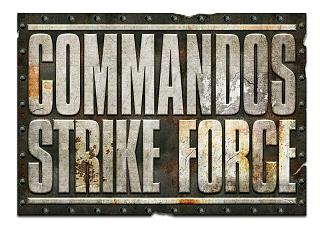 Eidos, one of the world?s leading publishers and developers of entertainment software, announces the return of the legendary Commandos in the World War II first person shooter Commandos Strike Force. Developed by Pyro Studios, Commandos Strike Force will be released worldwide in spring 2005 on PlayStation 2, Xbox and PC.

In a new direction for the multi-million selling series, Commandos Strike Force takes you right into the heart of the action from a first person perspective. Take control of the three members of the ?Strike Force? unit, each with their own play style. Switch between the Green Beret, always at the heart of the action with his expertise in combat and the use of heavy weaponry, the Sniper with his nerves of steel and expert marksmanship, and the Spy, stealthily striking at the heart of the enemy. However, it is up to you how you execute plans of attack by combining the Commandos? unique skills.

Set in war torn Europe amid the backdrop of World War II, you must take your elite group of Commandos behind enemy lines on a series of linked missions through France, Russia and Norway. Destroying a Nazi ship, ambushing enemy troops, freeing French Resistance prisoners and kidnapping a general are a few of the large range of missions. As well as a compelling single player campaign, the game features a variety of original online multiplayer modes. In the most fearsome war ever fought emerged the most fearless soldiers.

Ignacio Perez, ceo of Pyro Studios says:
?By combining the tactical approach of the previous Commandos games with the intense action of a fps, Commandos Strike Force will provide a more cerebral approach to the war game genre. Strike Force is our most ambitious project ever and we believe that this game will set a new benchmark for World War II videogames.?

Mike McGarvey, CEO of Eidos says:
?The Commandos series has established itself as one of the most popular and enduring franchises within the World War II genre. With this evolution of the series coupled with Pyro Studios? proven expertise, we are confident that Commandos Strike Force will be the greatest episode in the series to date.?
Companies: Eidos Pyro
People: Mike McGarvey
Games: Commandos Strike Force