GoldenEye: Rogue Agent and Need For Speed Underground to follow. 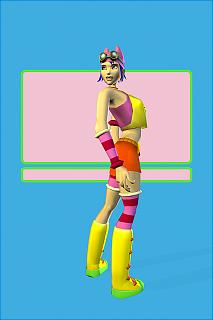 All Images (2) »
Electronic Arts today revealed in-game details of Tiger Woods PGA TOUR Golf, Madden NFL 2005 and The Urbz: Sims in the City for the Nintendo Dual-Screen (Nintendo DS). Leveraging the handheld system's distinctive features including the dazzling dual-screen design, each game boasts features that could only be experienced on the unique Nintendo console.

"The launch of the Nintendo DS is a big event for game fans worldwide. We will be there with some of our most popular franchises," said Gerhard Florin, Senior Vice President and Managing Director of Electronic Arts Europe. "Each of our games has been custom designed for the Nintendo DS, guaranteeing a one-of-a-kind entertainment experience."

Developed at EA Canada in Vancouver, British Columbia, Tiger Woods PGA TOUR on the Nintendo DS retains the hallmarks of the series including legendary courses and world-class golfing. As with the hit version that inspired it, players will take on Tiger Woods, Vijay Singh, Jack Nicklaus and other golfing greats from past & present. Players create their golfer, develop their skills and step on to the green to challenge the masters on some of the world's top courses including five licensed and one fantasy courses from the Tiger Woods series. However, unlike any past iteration, this innovative version of the game allows players to utilize touch screen technology to command control of their swing and position their shots like a pro. When they feel truly confident, players can fire up the multiplayer component to challenge up to four friends in wi-fi networked play. Then, see who's the real master.

A spin-off of The Sims, the most successful PC Game of all time The Urbz: Sims in the City is being developed in Redwood City by the EA Maxis Studio in conjunction with Griptonite Games. Urbz aren't typical Sims; they have a completely new look, attitude and outlook on life. Roaming through the rough-and-tumble city streets, Urbz are all about their friends, their pets and building their reputation. This highly-anticipated title will benefit from the unique Nintendo DS capabilities by offering players a touch-screen input and a multitude of in-game features that are not available in any other version of the game. Exclusive features for the Nintendo DS include 24 objects, a unique touch-screen menu system, 5 minigames, 7 characters and 5 pet species that players can create with the special in-game 'gene manipulator'.

Madden NFL 2005 is the deepest and most authentic handheld sports game ever. Taking advantage of the unique Nintendo DS hardware feature set, Madden NFL 2005 gives players unprecedented control during gameplay. Gamers can now use the Nintendo DS touch screen to call plays, utilize the kick meter and select audibles at the line of scrimmage. The second screen also is home to Field Radar, which allows gamers to see where all 22 players are on the field while staying in the heart of the action on the other screen. Madden NFL 2005 breaks new ground by allowing players to go head-to-head in Madden NFL 2005 via wireless play. The game delivers unprecedented 3D graphics while featuring authentic NFL uniforms for all 32 NFL teams and player portraits for each NFL player. With a full season mode and fun game modes such as Situation Mode and 2-Minute Drill, Madden NFL 2005 for the Nintendo DS delivers its signature level of depth in the palm of your hand. Tiger Woods PGA TOUR Golf and Madden NFL 2005 both have a PEGI rating of 3+ and will ship under the EA SPORTS brand. The Urbz: Sims in the City also has a PEGI rating of 3+ and will be released under the EA GAMES brand. These three titles will be available when the Nintendo DS launches.