Data Design gets down and dirty 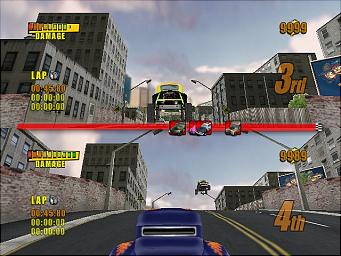 All Images (5) »
Data Design Interactive would like to announce that their six release this year has gone gold; Urban Extreme on PS2 will be published by independent games distributor Phoenix Games.

Urban Extreme takes you to the edge of your seat in this super-charged wild racing world - you’ll be racing huge V8 powered super cars and chunky off-road army vehicles, bouncy beach bugs and supped-up rally cars. Take to the streets, and try to stay on the road, as you zoom around the suburbs at break-neck speed.

Urban Extreme utilises an ultra-realistic physics system to ensure every bump, nudge, crash and crunch during the race affects your vehicle as it should. Get a corner wrong or crash into another vehicle, and you skid, slip, flip or take to the air as any car in the real world might!

Race well and claim victory against your opponents to earn prize money, which you can use to unlock extra secret vehicles, each with their own handling dynamic and strengths and weakness on the road.

Urban Extreme allows you to play against a friend, in single races, or you can go it alone in Time Trial, giving you the opportunities to search out the racing line and learn how fast each corner can be taken!