Black Eyed Peas, Missy Elliot and more in the mix. 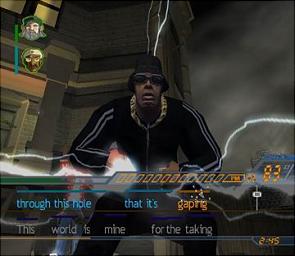 All Images (2) »
Eidos one of the world’s leading publishers and developers of entertainment software, today announced details of the new school tracks featured in its upcoming rap game Get On Da Mic. The game is the first true music performance game where players use a microphone or headset to rap along to songs by their favorite MC’s. Get on Da Mic is in development by Artificial Mind & Movement (A2M) in partnership with Highway 1 Productions. Get on Da Mic boasts a robust soundtrack including 40 tracks originally made popular by the hottest names in hip hop. Get On Da Mic will be available for the PlayStation 2 in late October.

“Get On Da Mic is the first pure rap game to feature both songs from old school legends and tracks from today’s hottest artists. The new school line-up includes rhymes originally made famous by Missy Elliot, MOP, DMX, and Kanye West among others making Get On Da Mic a must have for players that love hip hop music.” says Chip Blundell, Global Brand Director at Eidos Inc.

The Get On Da Mic soundtrack will feature a deep set of tracks to choose from. Players can get loose with tracks originally made famous by the current era of mega stars such as Notorious BIG and Snoop Dogg, then lay down rhymes to classic rap tracks from the Sugar Hill Gang, Public Enemy and Sir Mix A Lot or enter the “G-Funk” era with tracks previously performed by artists such as Dr. Dre and Tupac.

Following are some of the new school tracks available in Get On Da Mic:

Get On Da Mic also features some well known names in hip hop. US celebrity reporter Sway from MTV News will star as the host of Get On Da Mic, while The Evil Genius, Hot 97’s own DJ Green Lantern, rocks the turntables throughout the game. And finally Jadakiss, considered one of the top lyricists in the rap game and now a certified platinum artist with his latest release “The Kiss of Death”, is featured in the game’s advertising, packaging and public relations efforts.
Companies: A2M Eidos Hwy 1
People: Chip Blundell
Games: Get On Da Mic