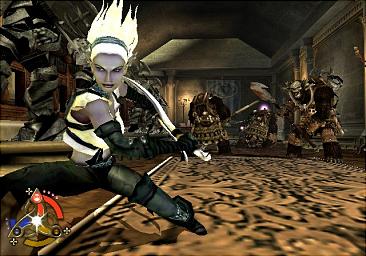 Atari, Inc. under license from Hasbro, Inc., today announced that the highly anticipated Forgotten Realms: Demon Stone, an action game set in the popular Dungeons & Dragons world created by Wizards of the Coast, is now available at retail outlets nationwide. Demon Stone for the PlayStation 2 computer entertainment system is retailing for an estimated price of $49.95 and is rated ?T? for Teen. Demon Stone is expected to become available for the Xbox videogame system from Microsoft and the personal computer in November.

Designed by Stormfront Studios, developers of The Lord of the Rings: The Two Towers, Demon Stone features a storyline developed by New York Times best-selling author R.A. Salvatore, and includes the extraordinary talents of actors Patrick Stewart and Michael Clarke Duncan, who provided their voices to two prominent roles in the video game. These combined talents bring Demon Stone to life in a classic story of good versus evil, with a world on the brink of destruction and a party of heroes seeking redemption.

?Demon Stone?s intense, action-oriented and cinematic gameplay represents the transition of a brand that has traditionally been associated with niche gameplay to one that is more accessible to a mainstream consumer audience,? said John Hight, executive producer, Atari?s Los Angeles studio. ?Demon Stone also demonstrates Stormfront Studios? perfection of the immersive, interactive experience by combining all of the important elements into a cohesive presentation, including: the prodigious vocal talents of Patrick Stewart and Michael Clarke Duncan; a powerful story by R.A. Salvatore and a moving orchestral score.?

In Demon Stone, the player directs a party of three characters ? Fighter, Sorcerer and Rogue. Each of the characters excels at a certain type of gameplay. The Fighter thrives in melee combat, the Sorcerer is excellent at ranged and magical combat and the Rogue excels at jumping, sneaking and disarming traps. The player controls one party member at a time -- switching between them on the fly -- while the other party members are controlled by the engine?s sophisticated artificial intelligence.

Demon Stone utilizes an extensive fighting system which is both easy to learn and visually stunning. Characters perform amazing attacks and feats at the simple touch of a button, but the system has sophisticated features for advanced players who want to tailor their attacks to maximize their damage in specific situations. Unique special attacks, combinations, linked combos, super attacks and even group super attacks allow advanced players to excel against their most fearsome foes.