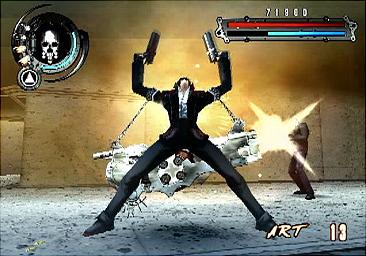 Video Game publisher Mastiff today announced that Gungrave: Overdose for the PlayStation 2 computer entertainment system has shipped to retail stores throughout North America. The game will carry a special low suggested retail price of $14.99, along with other exceptional bonuses only available for a limited time.

?Bursting at the seams, [Gungrave: Overdose] has been jacked up eight ways from Sunday with more characters, more levels, and more movies and all that adds up to plenty more heavy metal-infused action,? says Ed Lewis, Associate Editor of IGN.com. ?It's goofy and insane and it's a hell of a lot of fun.?

Anyone who purchases a copy of Gungrave: Overdose between September 2004 and March 2005 will receive a three-issue trial subscription to Play Magazine (an $18.00 value). Add a limited edition Gungrave art card, featuring images from Geneon Entertainment?s Gungrave: Beyond The Grave anime DVD packed into every box, and you have one of the most incredible deals ever offered to gamers.