No tracklisting confirmed as yet... 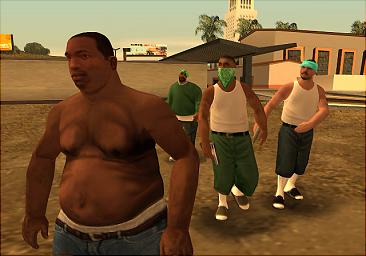 Rockstar Games, the world-renowned publishing label of Take-Two Interactive Software, Inc., and Interscope Records, a part of Universal Music Group, proudly announce a joint venture for the soundtrack to Grand Theft Auto: San Andreas, one of the most highly-anticipated video games in history. The details surrounding the artists and track listings on the soundtrack will be kept tightly under wraps until the weeks leading up to the game's launch on October 19, 2004 for the PlayStation 2 computer entertainment system.

"Grand Theft Auto: San Andreas takes place in the early 1990's in a fictional west coast setting, so fans of the blockbuster series can expect the soundtrack to cover the full spectrum of music genres and reflect the sound, vibe and feel of the FM radio dial from that time period," stated Terry Donovan, CEO of Rockstar Games. "The in-game radio stations featured in Grand Theft Auto have been one of the most celebrated and revolutionary aspects of the game since its inception. Through our partnership with Interscope Records, we are confident that the Grand Theft Auto: San Andreas soundtrack will continue to reach new standards of excellence and creativity, and will exceed anything that the video game industry or Hollywood have ever produced in terms of size, scope and depth."

"We are happy to be working with Rockstar Games on the soundtrack to Grand Theft Auto: San Andreas," said Jimmy Iovine, Chairman of Interscope Geffen A&M Records. "I believe that the enormous effort both companies have made in putting the soundtrack together has resulted in something truly special that will be reflected in both the game and the soundtrack albums."