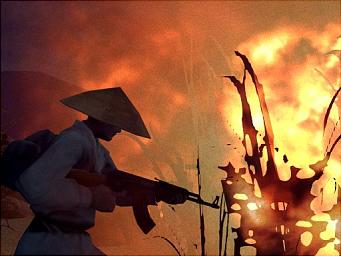 Shellshock Nam '67
All Images (3) »
Eidos, one of the world’s leading publishers and developers of entertainment software, announces its line up for the Game Stars Live show at London’s Excel exhibition venue. Eidos will be exhibiting at stand D3 from 1st – 5th September.

The big news from the Eidos stand is that the world champion of football management games, Championship Manager 5 will be playable for the very first time! Gamers and football fans alike will have the opportunity to get their hands on this highly anticipated PC title and be among the first people to try out the new and improved user interface and be amazed by the speed of the new ‘constant gameplay’ engine. The game will be released in October 2004 for the PC.

Also making its UK premiere will be LEGO Star Wars. Playable at Game Stars Live, LEGO Star Wars combines two childhood favourites, LEGO and Star Wars, to create an innovative and exciting action-adventure title designed for young gamers. The game is based on The Phantom Menace, Attack of the Clones and the eagerly awaited Star Wars: Episode III Revenge of the Sith, slated for worldwide release in May 2005. The game will be released in April 2005 for the PlayStation 2, Xbox, PC and Game Boy Advance.

Other hot off the press news is that Eidos will be hosting a multiplayer Crash ‘n’ Burn tournament where the daily winner will walk away with Ł500 cash! Hosted by Talk Sport games broadcaster Jonathan Beales, gamers will get the chance to go head to head in a furious, nitrous fuelled racing fest where your primary objective is to take first place; your secondary objective is to run everyone else off the road! The tournament is open daily to all visitors and heats will start at 1pm with the final show down at 5pm! Do you have what it takes to win?

Other titles on the Eidos Stand:

Snowblind (PS2, Xbox)
Experience the dramatic intensity of the frontlines of a war through the eyes of the first of a new breed of super soldiers in this gritty and epic first-person action game.

Players live the fantasy of being an elite special operations combat soldier with access to the most high-tech weaponry, gadgets and vehicles, presented with all the realism, emotional intensity, and valor found in the popular “War Games” shooter genre.

ShellShock: Nam ’67 (PS2, Xbox)
ShellShock: Nam ‘67 focuses on one man’s experience of the most controversial war of modern times. You take on the role of a rookie soldier on his first tour of duty as he experiences the fear, chaos and atrocities of the Vietnam War. From the napalm bombardments of civilian villages and the gruesome VC (Viet Cong) boobytraps, to the permanent threat of invisible foes and deadly ambushes, Shellshock: Nam ‘67 dares to go where no other war game has gone.

No medals, no honour, just survive!

Imperial Glory (PC)
Forge the destiny of the world amid the turbulent times of the early 19th century. Lead one of the Great Empires in titanic conflicts, or achieve economic dominance backed by shrewd diplomats and resolute military.

Command your troops in large-scale battles across the globe, from the green fields of England to the icy wastes of Russia and sweeping deserts of Morocco. However, ultimate glory will depend on your utilising politics, trade, diplomacy, resource management and technology research. This is an age of change – be at the leading edge of the modern world or your civilization will crumble and fall.

Get On Da Mic (PS2)
Think you have what it takes to make it to the top of the hip hop game?
Get on da Mic and prove it! Start your career as an up and coming rap star and gain respect in the game to cut your first album. Work your way from the mirror, to finally blow up the mic at your own concert. So what are you waiting for, grab your mic and prepare to take on the world of bling to the max!
Companies: Eidos
Games: Championship Manager 5 Crash 'n' Burn Get On Da Mic Imperial Glory Project: Snowblind Shellshock: 'Nam '67