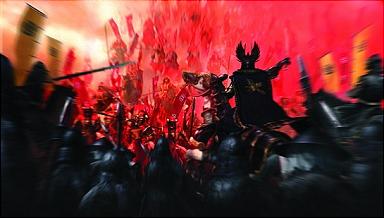 The Kessen series melded two elements, ?game? and ?drama? together into grand epics that have won the acclaim of critics and consumers worldwide. The appeal of commanding one side of an epic clash between two great armies and the awe of watching dramatic events unfold across spectacular vistas are what the Kessen series is all about. Kessen III will be considered the game that redefined the Kessen series.

One of the most appealing elements of the Kessen series has always been its use of the ?Group Control Engine?. Kessen III will utilise the power of the PlayStation 2 to the maximum to further evolve the ?Group Control Engine? that will power Kessen III. No longer will the player be limited to watching a unit attack while under the control of the group engine ? now in Kessen III, the player has direct control of any unit?s action. The player now chooses to control the officer or the entire unit!

The storyline will follow the rise of the well known Oda Nobunaga and his allies and forces that supported his quest for supremacy. This deep and compelling narrative will be supported with over 120 minutes of movie sequences.

Blessed with an indomitable vision and fearless constitution, Oda Nobunaga is tasked with overcoming the chaos of his world and bringing peace to Japan.