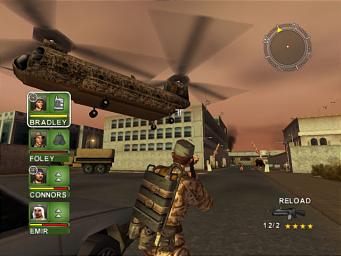 Conflict Desert Storm
All Images (2) »
Outsource Media would like to announce that Mark Estdale (CEO, Outsource Media) will be speaking at the 2004 European Developers Forum on production values and the voice in games.

The forum is called No More Cheese - Speech for Games and is taking place on Thursday 2nd September at 5pm. The topics he will be covering will include writing, casting, recording and post-production of dialogue for games. Why has speech in games historically been so poor, and what's today's best practice when it comes to believable dialogue?

Mark Estdale (CEO, Outsource Media) said, ?If another game producer comes to me with a script written by a programmer I?ll tear his head off and shout down the bloody hole. Occasionally programmers show genius but on the whole script writing needs script writers. Hollywood bins about 40,000 scripts a year and makes money on about five. There?s good reason for this and it isn?t just the script.?

Outsource Media are recognized as the interactive entertainment industry?s leading voice Production Company, this year alone they have been nominated for the 2004 Develop Industry Excellence Award for Services and Outsourcing, their productions were nominated for 10 BAFTA Games Awards 2004 and two of their titles - TimeSplitters 2 and Conflict Desert Storm - were on the shortlist for the BAFTA Sunday Times' Readers Award.