For those about to rock, Empire salute you! 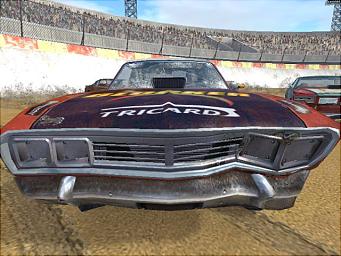 Empire Interactive are celebrating the spirit of 50 years of Rock n' Roll by encouraging new rock and indie bands to look to the interactive entertainment industry as a springboard to a career in music. Empire have teamed up with Overplay.com, the up and coming music site dedicated to the development and exposure of unsigned bands, to put together a killer rock soundtrack for their upcoming free-roaming, smash-fest racer FlatOut which releases on Sony PlayStation 2, Microsoft Xbox and PC in Fall 2004.

Empire and Overplay.com hosted a competition where up to 12 tracks from bands using the site were selected to appear in the FlatOut game. All entrants were unsigned bands at the time of entry and the only specification for entry was that the music had to be rock, metal or indie oriented, to reflect the full-on nature of the gameplay in FlatOut.

"Empire are excited to be working with overplay.com in encouraging and supporting the world's best unsigned bands, the winners getting exposure in this year's most action packed racer" commented Paul Benjamin, Marketing Manager at Empire. He added that: "special recognition goes to No Connection for their overall winning song, Burnin', which we feel captures the essence of FlatOut with its raw edge."

Paul Brookes, the creator of Overplay.com, enthused "The competition was a great opportunity for the winning unsigned bands to get their music on a commercial product and get their music heard by a new audience."

The following artists and songs will feature in FlatOut as part of the overplay.com competition:

Central Supply Chain (www.overplay.com/centralsupplychain) - The Ever Lasting; Are You Ready; FlatOut