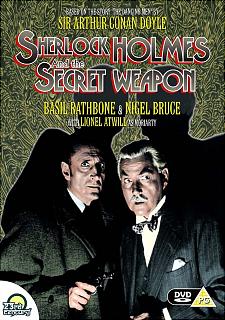 Sherlock Holmes fans are in for a double treat this August as Digital Jesters reveals it has secured a full-length Sherlock Holmes DVD movie to accompany every copy of its forthcoming PC CD-ROM escapade Adventures of Sherlock Holmes: The Case of the Silver Earring. The special double pack ? comprising the game and a copy of Sherlock Holmes and the Secret Weapon ? goes on sale on August 27th 2004, priced Ł29.99.

In The Silver Earring, Holmes embarks on an original Sherlock adventure which sees the world's greatest detective attempting to solve a hideous murder. As the game progresses, the narrative twists and turns through to the final, shattering conclusion in an adventure game which requires as much logical deduction as puzzle-solving.

Super sleuth Sherlock Holmes (Basil Rathbone) and his trusty assistant Dr. Watson (Nigel Bruce) are assigned to find the kidnapped scientist who developed the secret weapon, only to be foiled by Holmes' nemesis, the evil Professor Moriarty (Lionel Atwill). Based on the Sir Arthur Conan Doyle story The Adventure of the Dancing Men, this Holmes case transplants the Victorian sleuth into the realm of WWII espionage and is also the first of the films to introduce Dennis Hoey as Scotland Yard detective Inspector Lestrade.

"Sherlock Holmes: The Silver Earring is as close to the spirit of the original books as the much-loved Rathbone movies," says Leo Zullo, marketing director, Digital Jesters. "So we thought the best thing to do would be to allow our players to compare the two directly with the inclusion of this free, full-length movie. Rathbone is typically regarded as the best screen Sherlock, and this is easily the best computerised representation ? so they make perfect partners in this amazing double pack."