EA Gets Stranger with Oddworld 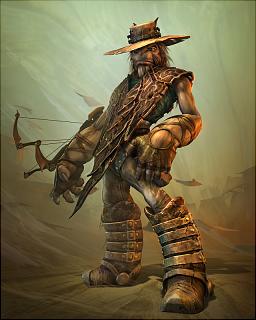 Chertsey, UK - April 17, 2004 ? Electronic Arts (NASDAQ: ERTS) announced today that it has signed a agreement with Oddworld Inhabitants for the worldwide publishing rights to the next Oddworld game, the latest in the internationally acclaimed character-based action series. Slated for release in 2005, the new title will bring a unique action gaming experience to owners of the PlayStation 2 computer entertainment system and Xbox video game system from Microsoft.

"Partnering with EA is a major win for us. Through EA's first-rate publishing and marketing expertise, the expanded universe of Oddworld can reach millions of game fans and extend the reach of this distinctive series," said Lorne Lanning, President of Oddworld Inhabitants.

"Over the past 10 years, Oddworld has consistently elevated the creative bar in each of their titles, providing a rich and engrossing game experience. Oddworld Inhabitants represent the type of high quality developer with which we're seeking to partner moving forward," commented Greg Richardson, General Manager of EA Partners.

With this next title the Oddworld team has taken a combination of traditional genres and added their own unique twists to deliver a refreshingly new interactive experience. Players step into the role of the Stranger, a western-style bounty hunter, who chases outlaws throughout the enthralling new frontier of the Oddworld universe. Set to award-winning visuals, players will be moved by the complex and inspiring story as the Stranger comes to grips with his true nature in the hunt for the ultimate bounty.

Since its debut, the Oddworld series has become one of the most popular game franchises of all time with nearly five million units sold worldwide, garnering more than 100 industry awards and gracing the cover of more than 50 magazines. The three previously released chapters, Oddworld: Abe's Oddysee, Abe's Exoddus and Munch's Oddysee have been heralded as revolutionary for their mix of brilliant graphical artistry, unique personality and compelling gameplay.