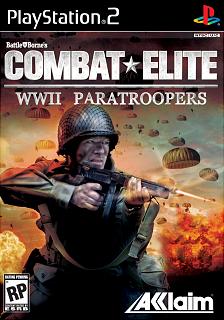 Combat Elite WW2 Paratroopers follows our fearful D-Day heroes as they rely on the skill and courage of their friends and comrades in order to survive the bloody battle. Starting at Private, Combat Elite allows the player to prove their fighting expertise whilst they rise up the ranks to earn promotion through the battle experience.

As dawn broke on 6th June 1944, Europe was in the cast-iron grip of Nazism. The seemingly impregnable Atlantic Wall still held strong. The end of the war seemed a distant hope. However, by the end of that same day, the skill and courage of U.S and British Allied Forces had established a precious foothold back in France. Combat Elite follows this historic route accurately as the Allies fight for the liberation of Europe in notorious battles, such as Market Garden and the Battle of the Bulge.

Fighting their way through streets of flying grenades and blazing gunfire players will sense the horror faced by our D-Day heroes as they battle to save the lives of their troops. Players can customise their brave troops as a result of their promotion and work as a team to help pave the way for the Allies by attacking the German forces from the inside. These battles will lead the player through rolling hills, snow covered open plains and battle-scarred towns throughout France, Holland and Belgium.

Eventually some may prove themselves worthy of the ultimate challenge: preventing German development of a weapon that could forever change the face of Europe - the atomic bomb. This dangerous mission will lead the player into the very heart of the axis: The Fatherland.