It's easier to make crime pay with new Gangland patch 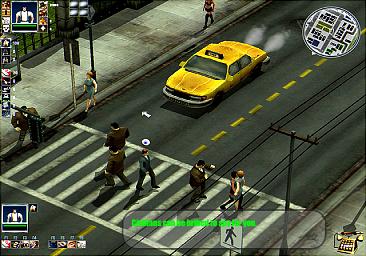 Game publisher Whiptail Interactive and developer MediaMobsters announced today that an updated patch for popular mafia PC game Gangland is now available to download online from www.whiptailinteractive.com and will be hosted and available on a selection of file server sites over the weekend including http://download.boomtown.net/en_uk/articles/art.view.php?id=5239. The 1.3 patch allows players to enjoy a range of enhancements and tweaks to the performance and playability of Gangland that make the game even more enjoyable and addictive.

"The 1.3 patch will give Gangland gamers a host of added choices and improved features that provide more control and make playing the game as pleasurable as eating a nice plateful of mamma's spicy meatballs," said Adam Gregersen, director of MediaMobsters.

The patch makes several improvements to the lobby section of the game. It adds a global chat lobby to Gangland with multiple rooms where people can meet and set-up multiplayer games online. Gangland's skirmish option has been moved to the singleplayer menu in the lobby, providing easier access to this exciting element of the game.

The 1.3 patch makes several other minor adjustments to Gangland. The target height has been raised for shooting out of vehicles, making it easier to hit characters on stairs and other platforms when executing drive-by hits on your enemies. When your players are being attacked and are sustaining injury their character icons will flash red. Gameplay gets even more interesting as AI controlled taskforces will now react to contracts being put out by other players.

The patch has added enhanced 'Hotkey' functionality that enables players to add vehicles to the 1-9 Hotkey selections in addition to a totally new key (default H) which allows your character to jump to his main safehouse position from anywhere in city, making it easier to defend your 'turf'.

Minor setup and load problems have been fixed on several of the games conquests. The patch also fixes the problem of trapped characters that could previously impair player's in-game performance. The 1.3 patch contains all of the improvements featured in the previously released 1.1 and 1.2 patches which added save game functionality and increased stability and performance within Gangland.

Gangland is available in all good gaming outlets now with a recommended retail price of Ł29.99. The game has a 12+ UK rating from PEGI. For more information on Gangland and for further details of the enhancements the 1.3 patch brings to the game, please visit www.whiptailinteractive.com.
Companies: MediaMobsters Whiptail
People: Adam Gregersen
Games: Gangland