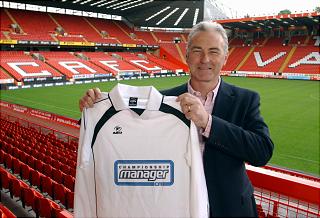 Day's main role is to ensure that Championship Manager 5 is the most realistic and accurate football management game in the world. One of his top priorities is to expand and develop the new training programmes with the game's developer, Beautiful Game Studios, devising routines and drills as used by top professionals. He will advise on the profiles of specific players, analysing their key skills and temperaments, and will provide details on the staff set-up at English clubs. Overall, his insider knowledge will give access to the thought processes of a real life manager or coach, both in the day to day management of the club and players, as well as in match situations.

Day enthuses, "My main role is advising the boys on what is realistic and true to life football-wise. I'm devising a realistic training programme that takes in the needs of the whole club. Hopefully my involvement can contribute to the continued success of the Championship Manager series and further improve the realism of the game."

As one of the most respected coaches in the game, and one of a handful of people to hold the UEFA Pro-License, Day's suitability for the role couldn't be more perfect. He has played for West Ham, Leyton Orient, Aston Villa, Leeds United and Carlisle Utd.

Day was Player-Coach in his last three years at Leeds and then became Player-Assistant Manager at Carlisle before taking over as Manager. Day became a Coach at Everton before becoming Alan Curbishley's number 2 at Charlton Athletic in 1998.

Day's proudest achievements include an FA Cup win for West Ham in 1975, promotion with Leeds Utd in the 89/90 season, promotion as manager of Carlisle Utd in 96/97 and promotion as champions with Charlton in 99/00.

John Davis, European marketing director at Eidos says: "Mervyn is one of the most respected and qualified coaches in world football. We are thrilled to have him on our team, and look forward to his insight and knowledge making Championship Manager 5 the best yet!"