Eidos, one of the world's leading publishers and developers of entertainment software, invites you to conquer the world in Imperial Glory. 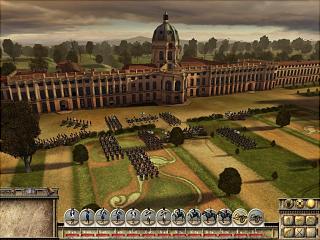 The game is being developed by Pyro Studios and will be released on PC in early 2005.

Imperial Glory promises to be the most extensive strategy game ever, offering an in-depth management model along with graphically stunning real-time land and naval battles in full 3D. Choose which of the five great 19th century Empires to lead: Great Britain, France, Russia, Prussia or Austro-Hungary, each with their own unique attributes.

Command your troops in large-scale battles across the globe, from the green fields of England to the icy wastes of Russia and sweeping deserts of Morocco. However, ultimate glory will depend on your utilising politics, trade, diplomacy, resource management and technology research. This is an age of change - be at the leading edge of the modern world or your civilization will crumble and fall.

Íńigo Vinós, PR Manager of Pyro Studios says: "Imperial Glory will offer an unrivalled, absorbing gameplay experience in the strategy genre. Our overall aim has been to offer incredible depth and detail, but at the same time ensure the game is accessible to all players."

John Davis, Eidos' European marketing director says: "Pyro's expertise and pedigree in this genre is widely recognised following the success of the Commandos series and Praetorians. Imperial Glory is a quality title that will shake the foundations of the strategy Empire."