Beyond Divinity heeds its fans 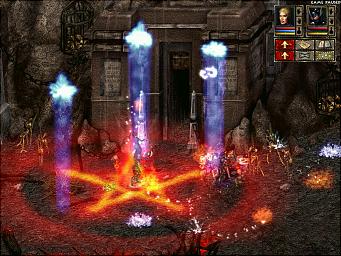 The street date for the English version of Beyond Divinity's has been postponed to late April 2004.

The main reason for the delay is Larian's commitment to give the fans the RPG they want. With the release of the Beyond Divinity demo last month, the studio obtained a lot of a valuable feedback from the RPG community.

While the overall comments were very positive, there were a few issues that troubled players. With the support of North American publisher Hip Games and UK publisher Digital Jesters, the developer is in the process of addressing these issues:

By employing the services of high quality improvisation actors in Toronto, any doubts that fans might have had about the voice recordings in Beyond Divinity should soon be history.

Likewise, by introducing multiple game modes allowing players to play Beyond Divinity as either an action RPG or a tactical RPG, fears that the game might be too hard for some existing Divinity fans should now be quelled.

The extra available time will also be used to do further polishing of the game, integrating further feedback from the forums at www.larian.com.

"We are very sensitive about what our community thinks about our games, and when we saw they were all but pleased by the voice recordings, the decision to go back to the recording studio was easily made." says Swen 'Lar' Vincke, project leader at Larian Studios. "With the support of Hip Games, whom I really want to thank, and a crew of sound engineers and actors who were willing to burn the midnight oil on this, we'll manage to set straight something that could've gone very wrong. Voice recording all the dialogues in a RPG as extensive as Beyond Divinity was a very ambitious task, and we didn't get it right the first time. I'm happy we've been given the opportunity to rectify that."

On the subject of the different game modes, Vincke said "One of the design goals of Beyond Divinity was to introduce more tactical combat to the mix. We thought everybody was going to prefer this over the typical hack & slash gameplay you found in the original game. To our surprise it turned out that a part of the community didn't want that at all. So we introduced different combat modes. The game now offers you the choice between action, tactical or hardcore combat, each leading to very different gameplay experiences. I think this is exactly what our audience was looking for. "

Divine Divinity, launched in 2002 was critically acclaimed for its depth and level of interactivity. In Beyond Divinity, Larian Studios takes what made Divine Divinity so deeply appealing, and pushes it one step further. Using an enhanced version of the original engine, the final product delivers infinite character development, unparalleled levels of interactivity, a wide variety of enemies; tons of quests and a brand new combat system. By catering to all of these elements with equal levels of importance, Beyond Divinity will truly deliver a total RPG experience.

In Beyond Divinity, you become soul-forged with a Death Knight. Your fate is to spend the rest of eternity bonded to this creature of evil, unless you can undo this curse. You and your unlikely partner embark on a great adventure to unlock the secret of rift-running ? your only answer to this life of darkness.