Beyond Divinity gets its own Novella. 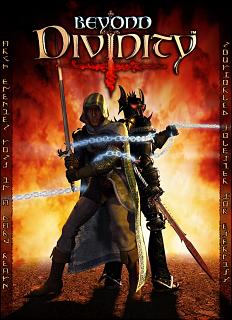 Bold new publisher Digital Jesters continues its plans to dominate the PC sector with its forthcoming release of fantasy RPG Beyond Divinity, which will exclusively feature a specially written 50-page plus novella by prestigious and respected writer Rhianna Pratchett. The novella, Child of the Chaos, weaves a masterful tale set in the original fantasy realm of the Divinity Universe, exploring magic and riftrunning between worlds, and capturing the imagination and essence of the game in its skilfully drafted pages and illustrations.

The novella will be offered as a special bundle retail pack and pre-order gift to UK gamers, with European gamers being able to receive the novella from the official Beyond Divinity website on game launch for a nominal postage cost. Stateside gamers won't be left out either, as North American publisher Hip Games is offering the special retail packthrough Best Buy (US).

With all game scripts and storylines edited by Rhianna herself and game code developed by Belgium-based Larian Studios, Beyond Divinity offers gamers and RPG fans a unique and rich fantasy world extending the team's award-winning precursory game Divine Divinity, which was published to critical acclaim in August 2002.

Beyond Divinity boasts an original and imagination-capturing storyline portrayed by a superior game engine and features stunningly detailed role-playing, where players assume the role of a character soul-forged with a terrifying Death Knight. The player's fate is to spend the rest of eternity bonded to this creature of evil, unless they can undo the curse ? resulting in an epic adventure to unlock the secret of 'Riftrunning'... the only answer to a life of darkness.

The game features a deep and detailed storyline filled with plot twists and optional sub-quests. Yet despite its intricacies, Beyond Divinity is an accessible RPG, which handholds novices through the early stages ? although experienced adventurers can whiz off at a pace of their choosing. A unique summoning doll adds a fresh element to the game, and with total party control, players can experience a level of interaction and adventuring unlike those seen before. Additionally, Beyond Divinity boasts endless replay value through its unique battlefield generator.

Leo Zullo, Marketing Director, Digital Jesters said: "Rhianna has played a central role in the development process of Beyond Divinity helping provide stunning scripts and inventive storylines. Her 50-page plus novella, Child of the Chaos, will be a real treat for new and existing gamers entering the Divinity realm"

Beyond Divinity will be available in the UK for PC CD-ROM on April 8th 2003. Priced Ł29.99 it will be published throughout the UK by Digital Jesters. Larian Studios has secured individual publishing rights with a number of top publishers across Europe for the European version, whilst North American publisher Hip Games will handle the US novella bundle deal across the US. A Macintosh version will follow later.