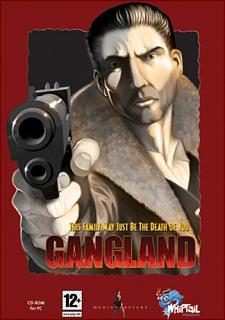 Game publisher Whiptail Interactive and developer MediaMobsters announced today that a 'Content patch' for their recently released mafia PC game Gangland is now available to download online from www.whiptailinteractive.com/downloads.php. The patch enhances a range of gameplay features and addresses minor stability issues with certain system configurations. The 'Content' patch is a precursor to the 'Save Game' patch which will be released later this month.

"This patch is just like a wiseguy with a pair of Tommy guns and a bad attitude," shrieked Chris Warrender, publishing director of Whiptail Interactive, "It squares up to the bugs; peppering them with bullet holes before fitting them with cement ankle warmers and dumping them in the river, never to be seen again."

The 1.1 'Content patch' addresses stability issues in Gangland, correcting the rare start up crashes and ridding the game of the stuttering which occasionally occurred in the Dockland district, as well as eradicating all input problems in the online chat bars. The patch also balances out the shootouts in Gangland by reducing the number of gas grenades available in the game to 10 and by allowing only selected soldiers inside the arms dealer to buy weapons.

Gameplay speed in Gangland is dramatically improved thanks to the ?Content patch? with 25% faster performance on ATI and a 50% increase in performance on NVIDIA cards. The patch also introduces some new end-user cheats to Gangland as well as great improvements to the in-game chat and to the game?s AI with the Police now reacting to a player?s vehicle, more in keeping with the pace of the game. In the Multiplayer lobby, pressing F5 now updates the server-list. Players are also now able to double click on servers and there is sound notification when someone joins a session.

Gangland combines a hybrid mix of RTS, RPG & SIM genres into a new breed of gaming mayhem and action. Gangland has 28 single player challenges and conquests and 24 different multiplayer conquests and shootouts in multiplayer mode where players can use seven different vehicles and more than a dozen weapons to try to rule the streets. Multiplayer action supports up to eight players over LAN and/or Internet during the same session.

Gangland is available in all good gaming outlets now with a recommended retail price of Ł29.99. The game has a 12+ UK rating from PEGI. For more information on Gangland or to download the demo, please visit www.whiptailinteractive.com or www.mediamobsters.com
Companies: Whiptail
People: Chris Warrender
Games: Gangland