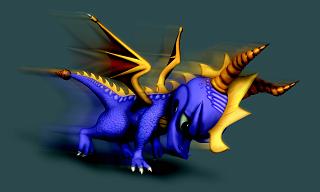 Spyro
Vivendi Universal Games (VU Games) today announced the next installments in the best-selling Crash Bandicoot and Spyro the Dragon videogame franchises. Crash Bandicoot: Fusion and Spyro: Fusion are scheduled to ship on the Game Boy Advance video game system in second quarter 2004. For the first time, the two renowned characters will meet up in each other's respective adventures in these upcoming action platformers. Albany, New York based studio, Vicarious Visions, is developing the games.

In these single-player side-scrolling adventures, gamers can also link up with as many as three friends for numerous multi-player modes, including Party Games, Wager Games and Card Trading. Players can compete and win in mini-games galore, found throughout the environments, which reward with trading cards -- a new feature for both franchises. Connecting both titles gives gamers the option of unlocking special content and allows them to trade and/or wager the cards with their friends.

"We're extremely excited about putting a compelling new spin on these two immensely popular franchises by joining them together in such a creative way," said Michael Pole, SVP, Worldwide Development, VU Games. "Both titles are completely immersive stand-alone games that maximize the current technology of GBA linking - delivering the deepest Crash and Spyro GBA experiences yet."

In Crash Bandicoot: Fusion and Spyro: Fusion, Dr. Neo Cortex (Crash's nemesis) and Ripto (Spyro's nemesis) have accidentally met up through underground portals and are set on taking over the entire universe. In an attempt to share resources and expand their territories, Cortex and Ripto are using portals to flood their two worlds with their evil minions. Crash and Spyro must team up with each other to discover the identity of the new menace and save the universe from this evil plot!