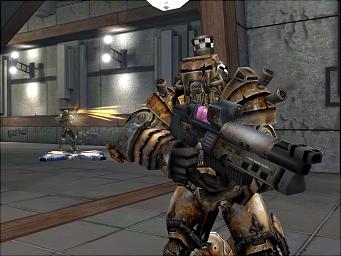 Gamers worldwide have made the trial version of Unreal Tournament 2004 one of the most popular game demo downloads of all time, with more than 1.5 million downloads in the first week of availability. The demo first hit the Internet on Wednesday, February 11, and was distributed on a worldwide scale.

Fans can download the demo directly from www.unrealtournament.com or choose from a list of mirror servers found on the Web site. The full version of Unreal Tournament 2004 is expected to be available at retail in March; pre-orders are now available at all major game sales outlets.

"Fan reaction has been over-the-top, demonstrating that the 'Unreal Tournament' franchise is still the King of the Hill for online multiplayer games," said Peter Wyse, executive producer at Atari. "Epic's excellent work at reinventing its own masterpiece continues to impress gamers worldwide. The introduction of Onslaught mode, the reemergence of Assault mode and the all-new vehicles in 'Unreal Tournament 2004' have created exactly what action fans have been waiting for - the definitive multiplayer experience on PC!"

"We are really proud and excited to see the fans of the 'Unreal' franchise embracing the all new gameplay elements in 'Unreal Tournament 2004' in such overwhelming numbers," said Tim Sweeney, founder of Epic Games. "As a company, we focused hard on making a game that was more than just an incremental improvement and could meet our standards for breaking new ground in terms of gameplay innovation and multiplayer competition. Clearly, as PC gamers everywhere have demonstrated, 'Unreal Tournament 2004' stands to redefine what it means to compete online."

Some of the new features showcased in the "Unreal Tournament 2004" demo include:


Unreal Tournament 2004 is expected to release in March, in both a standard and a Special Edition format. The game will feature more than 100 environments and 80 characters as well as all the action and excitement that made the original Unreal Tournament a smash hit.