Konami of Europe?s Karaoke Stage brings the classics to your PlayStation 2 ? as sung by you! 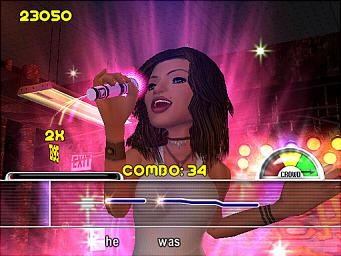 Konami of Europe has announced one of the most innovative titles to grace the PlayStation 2, as Karaoke Stage ? a stunning, family-orientated sing-along game ? is launched in May.

Karaoke Stage is set to change the way we use the PlayStation 2. Featuring an incredible selection of Karaoke classics, the game invites players to step up to a USB-compatible microphone and turn their homes into a concert stage as they sing their favourite tunes and are supported by the game?s in-house bands and a number of appreciative audiences. Using proprietary voice recognition software, Karaoke Stage judges the user?s pitch and rhythm as they sing along to a host of well-known tunes, ranking them as they sing.

As a user-created on-screen alter ego dances on stage and sings to the crowd, the lyrics to each song and the length of each note are detailed at the bottom of the screen. As the player sings along, the game cleverly gauges their accuracy and closeness to the real song, rating them as anything from ?poor? to ?great.? The audience is also quick to offer an opinion of the player?s performance, with the on-screen crowds drifting away if the player fails to impress or going wild in appreciation of a real star.

Karaoke Stage enjoys a huge complement of tracks in the final game, with Konami offering the would-be star an extensive catalogue of tracks that spans rock, classic ballads, pop and R?n?B ? including karaoke stalwarts such as ?Wind Beneath my Wings? and ?Girls Just Want to Have Fun.? Also featured are modern-day hits from the likes of Avril Lavigne, REM and Barenaked Ladies, while PAL versions of the game will also boast a number of tracks not seen in the US release.

Add to this Karaoke Stage?s brilliant ?Showtime? mode, which follows the player?s singing career as they begin in grimy clubs and chase pop superstardom, and it becomes obvious that Karaoke Stage is certain to enjoy the same phenomenal success as Konami?s already ever-popular Dancing Stage series.

Karaoke Stage will be released for PlayStation 2 in May 2004.
Companies: Konami
Games: Karaoke Stage