Alias out to own from April/May on Xbox, PC and PS2 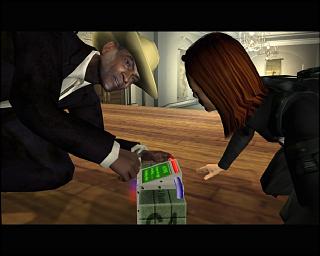 "Alias is an important initiative in our strategy of producing games that reach not only the core gaming community, but an older segment of the video game market through our newly formed label, Buena Vista Interactive," said Graham Hopper, Senior Vice President and General Manager, Buena Vista Games, Inc. "Alias is another example of the match of a great franchise becoming a great game."

Based on the popular TV show of the same name, Alias is a third-person action adventure video game that allows players to step into the role of the series' lead character, Sydney Bristow, an agent for the CIA. Bristow must use her cunning, extensive knowledge of martial arts and array of high-tech gadgetry to accomplish dangerous missions. Alias encompasses all of the key elements behind the series' success, including high-action combat, stealth missions and time-based objectives, espionage, intriguing plot twists, high-tech weaponry and stunning gameplay locations that span the globe.

The following Alias cast members are featured within the video game:


Alias was created by J.J. Abrams, who executive produces the series along with John Eisendrath, Ken Olin, Alex Kurtzman-Counter and Roberto Orci. The series, which is filmed in Los Angeles and premiered on September 30, 2001, is from Touchstone Television.

Alias will be available this spring on the PlayStation 2 computer entertainment system, Xbox and PC at suggested retail prices to be determined. For more information on this game, please visit www.aliasthegame.com.
Companies: Acclaim Buena Vista
People: Graham Hopper
Games: Alias