March 26th for The Twin Snakes 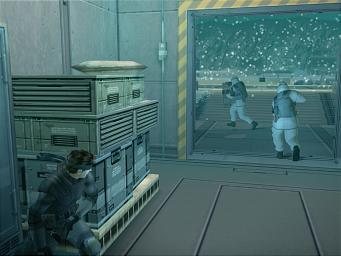 Konami of Europe has announced that Metal Gear Solid: The Twin Snakes ? the unique collaboration between Metal Gear creator Hideo Kojima and Nintendo?s development legend Shigeru Miyamoto ? will be released on March 26th. It marks the first appearance for the series on Nintendo GameCube, and is already being described as one of the games of the year for the Nintendo format.

Encased in packaging featuring an exclusive image by lead artist, Yoji Shinkawa, Metal Gear Solid: The Twin Snakes is the result of a unique alliance between series creator Hideo Kojima, Nintendo development icon Shigeru Miyamoto and Canadian development studio, Silicon Knights. Working closely together, this enviable array of talent have updated the original story first seen in the PSone version of Metal Gear Solid, and bringing it to life using the landmark graphics and gameplay elements seen in the seminal Metal Gear Solid 2: Sons of Liberty for PlayStation 2.

Cast as Solid Snake, an expert covert agent, the player must help the legendary hero infiltrate an Alaskan nuclear missile disposal facility now under terrorist control. The base has been seized by the FOXHOUND group who are planning to use the weapons within to hold the world to ransom. Snake?s mission is thus simple: enter the base, eliminate the terrorist cell and neutralise the nuclear threat ? a weapon codenamed Metal Gear.

Metal Gear Solid: The Twin Snakes retains the many gameplay elements that have seen the series hailed as one of the all-time video game classics. Players have total control of Snake?s many skills as they enter and stealthily make their way through the base. As such, Snake can sneak behind guards, stow them in lockers, use silenced weapons to take out targets from afar, and use all his covert skills to bypass security systems, patrolled areas and to enter restricted areas. Metal Gear Solid: The Twin Snakes also incorporates elements not available in the original PSone game, with the GameCube game offering a first-person view of the action, the ability to hang from ledges, and to open, climb into and search lockers.

The Nintendo game also benefits from specially created CG sequences, overseen by renowned Japanese film director Ryuhei Kitamura and utilising the latest in motion-capture techniques. Similarly, all the voices heard in the game were re-recorded afresh, using Snake artist David Hayter and members of the original cast once more.

With Solid Snake?s popularity cemented by an incredible response to the new game at the E3 Expo in Los Angeles, Metal Gear Solid: The Twin Snakes is already being hailed as one of the most significant GameCube titles of 2004. With its stunning visuals, incredible gameplay and cinematic soundtrack, the close working relationship between Kojima-san, Miyamoto-san and Silicon Knights has produced a worthy addition to the Solid Snake mythos.
Companies: Konami Silicon Knights
People: David Hayter Hideo Kojima Shigeru Miyamoto Yoji Shinkawa
Games: Metal Gear Solid: The Twin Snakes