Next game in best selling Timesplitters franchise due in 2005. 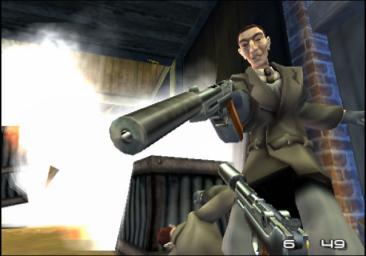 Electronic Arts, the world's leading interactive entertainment software company and UK-based developer Free Radical Design today announced a distribution and publishing agreement for the next game in the best selling TimeSplitters franchise. Developed by Free Radical, the new title in the celebrated series will be published by EA Partners and is scheduled for worldwide release in 2005. Financial terms of the agreement were not disclosed.

Originally released in 2000, Free Radical's TimeSplitters series revolutionized the first-person shooting genre by introducing players to a unique time-traveling gameplay mechanic. The innovative and compelling gameplay propelled the series to become a worldwide success. The original title was followed by the release of TimeSplitters 2 in 2002. Together, the two titles have sold over 2 million units worldwide. The next title will take the experience further with improved gameplay, unprecedented graphics, all new story and online play.

"Free Radical has proven itself as a world-class studio by delivering consistently beautiful, exciting and incredibly fun games," said Frank Sagnier, Vice-president Electronic Arts Partners in Europe. "We are thrilled to be working with Free Radical and to be adding a new title to our growing catalogue of externally developed games."