Atari invites gamers into the world of .Hack

European gamers can soon immerse themselves in the cult Japanese phenomenon. 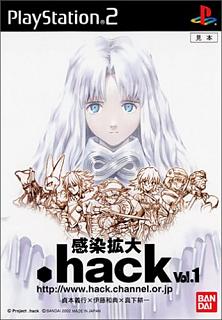 Atari and Bandai announce their collaboration on Project .hack: a multimedia entertainment experience on an unprecedented scale. Project.hack (pronounced 'dot hack') is a beautifully designed, vast manga/anime universe that simultaneously employs four different media: TV anime, original video animation, comic book and video game. Atari announces that it has secured the rights to distribute the video games and will be bringing part one of the series to consumers in March 2004.

.hack//INFECTION Part 1 is the first episode in a four-part series of video games that pioneers a new direction for the Role Playing Game genre by offering a simulated Massively Multiplayer Online Role Playing Game experience - the first of its kind ever created. Comprising a production team with unrivalled anime and manga experience, including a screenplay designed by Kazunori Ito, character design by Yoshiyuki Sadamoto and direction by Koichi Mashimo (whose CVs highlight work on Creamy Mami, Eat-Man, Ghost in the Shell and Neon Genesis Evangelion), the .hack series is Bandai's most ambitious project yet.

Set in the year 2007, a world class network game 'The World' is taking the gaming community by storm with its vast game space and never ending possibilities. However, behind the scenes a new type of AI is actually feeding on the information within 'The World', hiding within the deepest part of the network program.

The story of .hack begins with the 26 episode TV series (each episode is 30 minutes long), .hack//SIGN. This shows the .hack universe before .hack//INFECTION and the .hack//LIMINALITY series and introduces the events leading up to the beginning of the game. A bonus DVD containing episodes of the .hack//LIMINALITY video animation series will be bundled with each installment of the game, and will show the simultaneous events happening in the 'real world'.

The series of games revolves around the characters Kite and Orca. Kite is a 14 year old boy invited to play 'The World' by his schoolmate Orca. Before long, they are completely absorbed in the virtual online world and are attacked by an unknown monster. Links between the virtual and real worlds are closer than they had realised, and Orca becomes comatose in the real world as a result of the attack.

Believing that he'll find a way to revive Orca, Kite continues to play 'The World', discovering that anything is possible and nothing is as it appears?

.hack//INFECTION sees players take the role of Kite, fighting through contaminated levels of cyberspace as they take on and eliminate enemies, unlock codes to gate travel to new environments and embark upon multiple quests in detailed environments that transform in real time. This is an epic journey to discover who or what is lurking behind 'The World'.

Players can choose either Japanese or English voiceovers for an extraordinarily engaging, simulated MMORPG experience. No internet connection is required.

Martin Spiess, Senior Vice President of Marketing for Atari Europe said, ".hack is an incredibly ambitious undertaking by our licensors, Bandai, and we are excited to be involved with this project. It's a hugely imaginative concept that has been thoughtfully executed with great attention to detail. I am looking forward to seeing how the gaming community and manga fans enjoy immersing themselves in this unique interactive experience."

Naoki Eguchi, New Business Manager at Bandai added, "We have enjoyed a successful publishing relationship in the past with Atari, and are confident this project will confirm that the partnership between Bandai and Atari puts us at the forefront of imaginative, fun gaming. And .hack//INFECTION is certainly that; bringing innovation not only to the MMORPG genre, but to the whole concept of a manga universe."