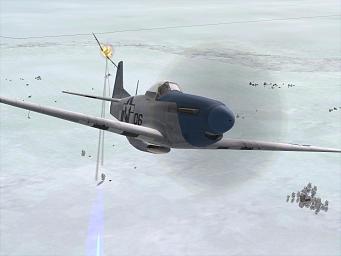 All Images (3) »
The action in Forgotten Battles is moving to the West. While the war rages in the East the Allies are attacking Germany's heartland. Round-the-clock bombing and the D-Day invasion means that the second front is now in action. The Luftwaffe is defending Germany with everything they've got, and now you can take part in twelve campaigns (six USAAF, six Luftwaffe) that chart the progress of this bitter battle form June 1944 to May 1945.

Created with help from the original IL*2 Forgotten Battles developers, this independent expansion from Just Flight is oozing authenticity. Just Flight's attention to detail has been partnered with Russian Rocket Games to give IL*2 fans the best expansion yet.

Mungo Amyatt-Leir, Just Flight's Managing Director, commented: "IL*2 has established itself as the best loved combat flight sim to date and we've been working hard since our release of Operation Barbarossa to bring another expansion worthy of the sim.

When we announced Battle over Europe at the Birmingham Flight Sim Show in October, everyone who saw it said it sounded fantastic. We've worked hard with some of the original IL*2 developers to create something really special. A product that blends our reputation for un-erring authenticity with some good old fashioned fun."

Just Flight and Russian Rocket Games have release a short movie clip at http://www.justflight.com (check under the Free Downloads link). In addition, a special Battle over Europe discussion forum, where users can ask questions about the product direct to the developers and see the latest screen shots, is at http://forum.justflight.com/forum/.