The favourite sport of witches and wizards. 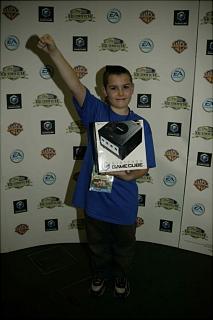 Following seven regional heats across the UK, twenty-one finalists earned their place at a specially created national final event held at the design studio where the Harry Potter: Quidditch World Cup computer and video game was created in Chertsey, Surrey.

More than one hundred friends and family members were in attendance to cheer along the twenty-one different finalists, and many of the guests also came dressed in their own specially made wizard costumes plus took part in the other activities on display in the themed studio surroundings.

After a series of gripping heats and semi-finals, two players grabbed their broomsticks and took part in a fast and furious aerial competition high above the Quidditch pitch on the NINTENDO GAMECUBE, and in an exciting and challenging win against Stephen Hardy from Norfolk, Ryan Quinn secured the final with a dare devil display of high flying moves and a heroic dive to capture the Golden Snitch and become the first place winner.

Ryan Quinn will now go on to the international grand final where twelve Quidditch champion players from around the world, including champions from Japan, Australia, France, Spain and the USA, and all will don their national team robes and compete in playoff rounds followed by a knockout competition to become the world champion and win the prestigious Quidditch World Cup trophy and other prizes.

The international event takes place at the Tower of London on 21st December, 2003, and as well as winning the chance to lead his team to international glory, in an exclusive prize for the UK winner, Ryan Quinn will also be immortalized in a picture on the wall in Hogwarts within the Harry Potter and the Prisoner of Azkaban computer and video game, scheduled for release in Summer 2004.

The magical sport of Quidditch is an exciting and challenging game involving two teams of seven players who fly on broomsticks, four balls in simultaneous play (one Quaffle, two Bludgers, and the elusive Golden Snitch), and a unique scoring system. In Harry Potter: Quidditch World Cup, players can control all the Quidditch positions and high-flying moves, scoring with Chasers, defending with Beaters and the Keeper, and trying to capture the Snitch with the Seeker. Gamers can choose any one of the four Hogwarts House teams (including Harry Potter's Gryffindor and Draco Malfoy's Slytherin) to triumph in the Hogwarts Cup, gaining an opportunity to attend the Quidditch World Cup.

In the Harry Potter: Quidditch World Cup videogame, Harry Potter fans will for the first time be able to fully experience the magical power, speed, and competition of Quidditch, the favourite sport of witches and wizards. Under development by EA's UK studios, the team behind the worldwide success of the Harry Potter and the Philosopher's Stone and Harry Potter and the Chamber of Secrets games that have sold over 20 million copies worldwide, the new title was released worldwide in November 2003 for the NINTENDO GAMECUBE, PlayStation 2 computer entertainment system, the Xbox video game system from Microsoft, Game Boy Advance, and PC-CD.

Harry Potter: Quidditch World Cup videogame on NINTENDO GAMECUBE also allows fans to experience the exclusive connectivity between the NINTENDO GAMECUBE and the Game Boy Advance. This connectivity allows players to work together on the same team, as one player takes on the role of the seeker using the Game Boy Advance whilst the other player plays as the Chaser, taking the gaming experience to a whole new entertainment level.
Companies: Electronic Arts
Games: Harry Potter: Quidditch World Cup