Or, people who genuinely understand and appreciate the finer aspects of modern music will have a jolly good time playing CyberGroove ? Hoorah! 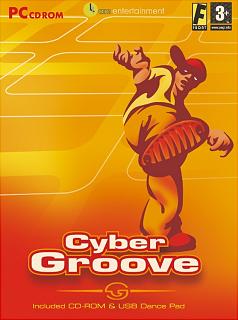 ?WE?RE gonna party, like it?s your birthday?, 4am are havin? it large in da house with its latest title release; CyberGroove ? the first ever PC dance mat game, which will feature downloadable tracks and dance steps, keeping it fresh for many years to come.

CyberGroove marks the first ever dance mat title for the PC with a new never-heard-before selection of music. Boasting 16 varied tracks, frantic footwork gameplay, downloadable steps and music and eye blistering colour graphics and lighting effects, CyberGroove will stand up and boogie on, remaining fresh when typical Playstation titles have puffed their last tired breath ? after all there are only so many times that you can dance to S-Club 7!!

In a daring move, 4am has turned its back on known celebrity tracks and has instead looked towards its sister company Big Dish Productions to produce all of the in-game music. Taking familiar styles from Dance, Club, Trance, R&B, Pop, Old Skool and House players are sure to relate to the many different types of music.

Blurring the lines and drawing the music industry closer to the games sector, Big Dish Productions will be launching a new artist in conjunction with CyberGroove in Q1 2004.

Neil Cotton, Communications Director at 4am, said: ?Dance mat games are a real party sensation, but the only platform that they are available for is Sony?s Playstation console. Although this accounts for a large fan base, the number of homes with a PC far outweighs that of the console market, but until now the PC has been neglected. We are filling that void with CyberGroove.?

The dance steps have been specially choreographed to give the player the maximum effect when dancing. The 8 way dance mat is connected through a USB plug and gives the player access to three different modes of play. The first two are a typical single or double player mode but the third is a unique ?together? option where two people can dance on just one mat simultaneously. One player controls the back half the mat and the other player the front half ? of course this means some extremely close dancing moves, so make sure you really like the person you?re dancing with first!

The graphics portray a mix of eye blistering colour and fast moving images, making the arcade dance sensation feel complete. There are no age restrictions and the gameplay needs no introduction ? just follow the arrows and feel the grooooove!

Developed by Taiwan-based Front Far East this unique and outstanding dance mat game (for Windows computers) will be fully-translated and feature European dance tracks for the UK market and published under license by 4am Entertainment ? scheduled for release on Friday 23rd January 2004.