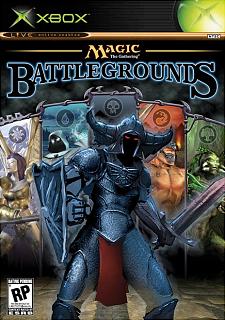 Atari today announced that it has shipped Magic: The Gathering ? Battlegrounds, for the Xbox videogame system from Microsoft and PC CD-ROM, to retail stores nationwide. Developed for Atari by Secret Level, Magic: The Gathering ? Battlegrounds is based on the incredibly popular trading card game created by Wizards of the Coast, a subsidiary of Hasbro, Inc. (NYSE:HAS). The game is filled with faithful card game translations of classic creatures, spells and enchantments and presented in a visually stunning 3D game environment rife with real-time strategic fighting, devastating wizard arsenals and intense creature combat.

Created by award-winning game designer Richard Garfield and published by Wizards of the Coast, the Magic: The Gathering trading card game made its debut in 1993. Today, there are more than 6 million Magic players worldwide. Just as in the Magic card game, in Magic: The Gathering ? Battlegrounds players will choose a duelist and any of Magic's five colors -- red, green, white, blue, and black -- to attempt to reduce their opponent?s life to zero. Of course, getting an opponent to zero will not be easy, players will have to utilize lightning reflexes, strategic brilliance and, on occasion, raw power to overcome an enemy.

An important aspect to Magic: The Gathering ? Battlegrounds will involve the player?s mastery of the five colors in the development of his/her duelist. Each color has a proficiency at certain types of activities, such as attacking, defending and healing. Players will be able to select up to two colors and utilize creatures, spells and enchantments in any combination from those schools. For example, a red duelist may choose to augment the attacking powers of his Lava Dragon by adding powerful green enchantments to his arsenal or increase his resilience by using white?s restorative powers instead.

Magic: The Gathering ? Battlegrounds will feature an engrossing single-player Quest Mode featuring a plot that includes characters from Magic: The Gathering storylines while also introducing a variety of new characters and locales. Single-player Quest Mode will be comprised of six chapters, each featuring up to 15 quests. Most quests will involve battles with resident duelists, sub-bosses or bosses who often control a particular creature or spell that the player has not yet acquired. As the player progresses, the resident duelists get tougher and control more powerful spells.