The legendary shoot 'em up is back and this is the final chapter..

R-Type is a classic in video game history; the legacy goes back a full 16 years since the original arcade shoot-?em-up hit the streets. 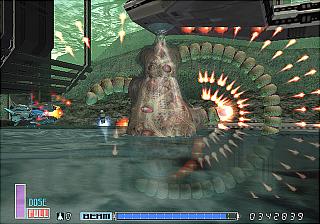 All Images (3) »
With the game being so popular in Japan earlier this year, a number of high profile UK specialist games magazines including Play couldn't wait to see the European version and took it upon themselves to import the Japanese version, giving it 89%.

Andy Law, General Manager, Metro3D Europe commented ?We are delighted to confirm that we have secured this license with Irem and have rights to publish R-Type Final throughout PAL territories. A product of this calibre is proof that we mean business as a progressive and dynamic publisher not to be taken lightly!?.

R-Type Final will be available with up to 101 ships, many of these true to the originals with numerous power-ups to help you battle against the Bydo enemy forces.

The Bydo has reincarnated by using its newfound understanding of the Force. Using technology stripped from Bydo carcasses, the galaxy has amassed a fleet of craft based on the R series and is set to deliver a knockout blow driving this unnatural evil from colonised space forever.

To survive you must use your plethora of weapons and variations including numerous ?power ups?, rapid fire cannons and bolt on shields. Hold down the trigger to charge up, wait for the gauge to tip 100% and release the trigger for a devastating discharge resulting in a wide screen strike against the bosses.

R-Type Final truly pushes the technical capacity of the PS2 to its limits. Keeping in line with the previous R-Types the graphics include beautiful pyrotechnic displays of light and colour that are wonderfully crisp and clear. The soundtrack in the game is an aesthetically minimalist soundtrack of transient breakbeats in the background. When it comes to action, the thumps and rumblings throughout the game play combined with the background track offer one of the most effective and substantial sound tracks the PS2 has seen to date.

R-Type Final is set in seven stages (some with specific variants enabled by defeating bosses in a certain fashion), with each stage paying homage to previous instalments of the game. Each level hosts challenging environments whereby players have to use their finely honed skills in fast paced horizontal action.