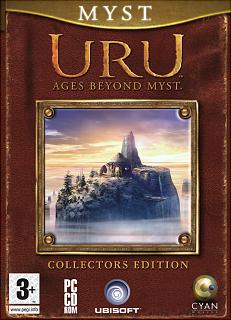 Cyan Worlds, Inc., (www.cyanworlds.com) developers of the legendary Myst and Riven, today announced the upcoming release of the Uru: Ages Beyond MYST Original Soundtrack, the music accompaniment to the latest chapter in the multi-million selling MYST series.

Cyan Music Director/Composer Tim Larkin has created the game's original soundtrack now available to pre-order on CD from www.cyanworlds.com/urumusic. The CD is due for release in December and includes over 50 minutes of original music including tracks from future updates to Uru online. The CD also features a special "Uru: The Makers" video and exclusive interviews with Tim Larkin and Rand Miller, the creator of MYST, with an introduction by long-time MYST celebrity fan David Ogden Stiers of the renowned hit TV show M*A*S*H who also voices the character of Zandi in the game.

In creating the musical score for Uru: Ages Beyond MYST, Tim Larkin has composed a unique experience for the listener by blending a wide range of ethnic as well as Western musical instruments and styles. Encompassing World music, New Age, Classical, Folk, Indian, Middle-Eastern and Native American, the score represents a multitude of musical cultures and is a hybrid of diversity that breaks new ground for soundtracks in games. Several exotic instruments are used in partnership to create the otherworldly atmosphere and themes of Uru: Ages Beyond MYST including the cathartic sounds of the duduk, Indonesian gamelon, African harp, Aboriginal didgeridoo and the shakahuchi, a Japanese bamboo flute.

"I really lean toward trying to find rare and exotic sounding instruments and I try to blend palettes of instruments that you wouldn't normally hear together", explains Tim, "With Uru I mixed as many diverse instruments as I could in order to create a new, more distinct palette."

Tim employed live performers as well as samples recorded with musical talent from around the globe, including Tuvan throat-singers from the grasslands of central Asia who lend their voices to produce multiple-pitch effects and harmonies. But perhaps the most memorable of all Tim's experiences creating this soundtrack was working with the Maasai singers. As he recalls, "That experience was pretty special. I'm not sure you'll hear that in any game to date. I do plan to utilize many of the chants that I have in future episodes."

From this almost limitless repertoire, Larkin weaves together a rich tapestry of ancient music traditions with modern techniques to create a contemporary score that is intricately orchestrated and beautifully performed by expert players and singers to enhance the surreal and graphically intense world of Uru: Ages Beyond MYST.