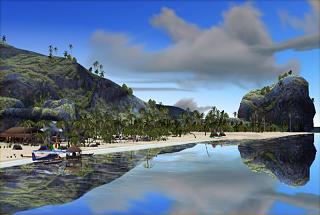 All Images (5) »
Ignition Entertainment will be providing a welcome boost to March's sales with the news that one of the industry's best-loved franchises will be making its debut on next-generation consoles and returning on PC. Archer Maclean's Pool Paradise will be released on PlayStation 2, Game Cube, Xbox and PC in March 2004, and sees the reunion of the code genius and Jimmy White for their fourth collaborative title.

Pool Paradise - developed by Archer and the team at Awesome Studios - offers the most comprehensive Pool simulation ever. Players spend their days playing pool on an amazing fully-animated South Pacific island where sun rises and falls from day to night whilst the sea rolls ashore and the palm trees blow sway in the cool ocean breeze.

Players land on the island penniless, but can win cash by beating the 30 opponents all competing in an Island league. Cash can be spent on game aids or bizarre items as well as unlocking the numerous sub-games and secret locations around the island. Pool Paradise features no less than 12 main rules sets, including all the popular 8 and 9 ball variations in UK and USA format, as well as 14:1, Bowlliards and Switchball. Players can enjoy the practice table out on the beach, or in the more serious competition hut, or maybe the secret cave. There's also a Stunt Hut featuring some very bizarrely shaped tables, from triangular to ice hockey themed.

As dusk comes down, the cicadas can be heard in the background, as players enjoy pool, lit by flame torches. Yet, by day, the sun provides ample opportunity for the balls to show off their amazing, dynamic, environmental reflections and accurate real-time shadows.

Around the island are mini sub-games including a unique cannon ball coconut shy, and Skee-pool ramp, plus that old favourite Darts back by popular demand. There's even an arcade hut with an arcade machine faithful to Archer's first ever commercial game, Dropzone.

Jimmy White makes a guest appearance in the game tournament ladder, and will be on-hand throughout the campaign to provide additional PR and marketing opportunities.

"Archer's snooker and pool related games have sold over two million copies since initially appearing on Amiga and Atari ST back in the early 90's, and with this being his final version of the genre, we're confident of success," says Peter Rollinson, Product Manager, Ignition Entertainment. "But this is far more than a simple update. Pool Paradise offers players more options, tables and mini-games than any title previously. Put simply, it's the definitive version of one of the greatest games in the world."