After six weeks at number one with 'Where is the Love?', is Postal 2 more popular than Cher? 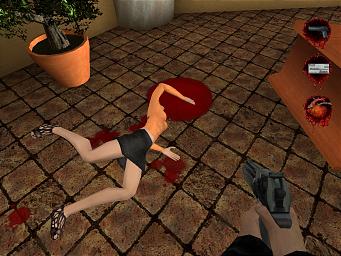 All Images (3) »
Postal 2, the "Goriest Game Of All Time"* has now spent over six weeks at the top of the UK popular music charts, after being featured in the music video for "Where is the Love?", the hit single from Canadian hip-hop outfit Black Eyed Peas and Cameron's favourite, Justin Timberlake. Postal 2 publisher Whiptail Interactive is marking the occasion by printing a special batch of limited edition celebratory stickers to adorn Postal 2 games, shop windows that stock the game, as well as cars, friends, small mammals and everything else you can think of.

Chris Warrender, publishing director of Postal 2 publisher Whiptail Interactive said, "Cher has got to be worried now that the Postal Dude is well into his sixth week at the top of the charts starring in the Black Eyed Peas hit 'Where is the Love?' He only has to hang on one more week to equal the seven week record that she set with Believe".

The 'Peas teamed up with Timberlake to make the music video that includes footage from uber-violent computer game Postal 2 which features everyone's favourite anti-hero, the Postal Dude. The video, which is taken from the Peas' latest album, Elephunk, was released across the UK and Europe on 11th June to rave reviews and has spent the last six weeks topping the UK pop charts.

The video, a reaction to the September 11th terrorist attacks, features two gaming enthusiasts enjoying Postal 2, the controversial PC game from developer Running With Scissors. Postal 2 lets players find their own reaction to 9/11 by allowing them to dowse people in petrol and set them on fire, hack peoples heads off with spades and fight the Taliban with cat silencer machine guns and toxic cows heads.

*As voted by ICE Magazine.