Dreamcatcher Games to publish Mojo! on next gen consoles

Hundreds of great puzzles to challenge the gaming genius. 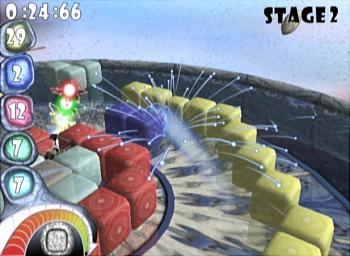 All Images (3) »
DreamCatcher Games today announced that it will publish Mojo! for the Sony PlayStation 2 computer entertainment system and the Xbox video game system. The game will be distributed on these formats in the UK by Mindscape priced Ł19.99 on PS2 and Ł24.99 on Xbox.

Mojo! is a stimulating 3D puzzle compendium that will test both the gamer's brain and reflexes. The user controls a highly energised sphere through 100 challenging stages of dazzling special effects. The object of the game is to try and complete the game's 100 puzzles, without running out of 'Mojo', the game's energy source. Players will collect all the magic coloured cubes in each level to build their 'Mojo'.

Mojo! is a highly addictive game, simple to understand but increasingly difficult to master - only the most talented gamers will get through to the 100th game!

The game's exciting multi-player modes offer support for up to four players with a series of exclusive multiplayer power-ups. The thrilling Co-op mode and the challenging Battle mode will delight all party game addicts with their intuitive and intense puzzle action.

Two bonus modes will enable the player to go even further into Mojo!: players can create their own puzzles through the unlockable stage editor, and save them to a memory card. By completing the game, players will also gain access to a special mini-golf course.

The game is played in three colourful environments, and is fully customisable, allowing players to create and edit each level and to adjust camera controls to suit their preferences.

Mojo! will be published for PS2 and Xbox by DreamCatcher Games and distributed by Mindscape in November 2003, priced Ł19.99 and Ł24.99 respectively.
Companies: DreamCatcher Mindscape
Games: Mojo!