NBA JAM slamdunks back onto the video game console

Supercharged and packed with blocks, dunks, tricks, all sealed with B-boy attitude - NBA JAM is coming back to a video console near you on October 24. 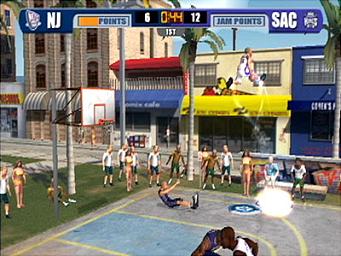 All Images (5) »
After a nine-year absence, the game that hypnotised the masses is coming to rock and shock a new JAM generation. Proving that the old skool never dies, Acclaim Entertainment is bringing the daddy of all basketball games kicking and screaming into the 21st century.

Developed for PlayStation 2 and Xbox, the game includes all the familiar JAM features of the six million-selling basketball blockbuster with over-the-top gameplay and spectacular dunks. 'On-fire' and 'Big Head' modes are in, as are 'no fouls', 'Hot Spots' and a number of hidden characters too. All 29 NBA teams including players and arenas are included.

Still retaining the classic feel of the original, players will become overwhelmed with 700 new moves including signature dunks for both current and old-time NBA stars. Players can choose from an assortment of legendary players from the past 50 years or make their own court superstar with the all-new 'Create-A-Player mode'. Gamers can even improve their player by purchasing skills and attributes in the Jam store.

With era-specific music, uniforms, hairstyles and commentary by Tim Kitzrow - the original voice of NBA Jam - any gamer can become a full master of the basketball game. Mix this up with some quick-play exhibition, heated tournaments and mini games, add some 3 point shooting, crazy handling and exclusive DVD footage, and b-ball fans have a hot game that's as action packed as it gets!

Reminisce again over 1994 with NBA Jam, the game that kick started the 90's basketball craze. Looking for some clean-cut moves? Go no further than the high-flying slam-dunks, ankle-breaking crossovers and the "get that outta here" blocks that made a whole generation love the original. Believe a man can fly once more with NBA Jam!