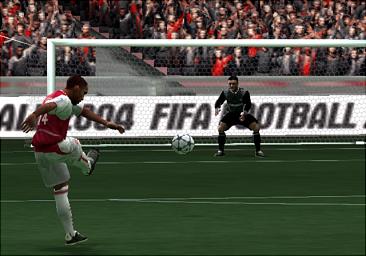 FIFA Football 2004, Medal of Honor Rising Sun, SSX 3, Need for Speed Underground and The Sims Bustin' Out provide online experiences ranging from the ultimate football simulation to WWII combat, open mountain snowboarding, underground tuned car racing, and the wacky and unpredictable world of The Sims. All of the titles support hands-free chat through a USB headset. PlayStation 2 online play requires a broadband connection, a network adaptor, and memory card for the PlayStation 2.

"EA's online play extends the gaming experience way beyond the boundaries of your living room," said Gerhard Florin, Managing Director of European Publishing at EA. "It gives gamers the opportunity to play with or against each other in some of the most exciting games this year no matter where they - or their friends - are located."

FIFA Football 2004 will allow sports fans to compete against each other online in several two-player modes, ranging from friendly matches through to official tournaments and leagues. Players will be able to discuss tactics and post-match analysis through hands-free chat via a USB headset. And new features will be added as the football season progresses, including the ability to download team transfer updates.

Medal of Honor Rising Sun will provide intense online multiplayer action for up to eight soldiers. Players will go head to head across nine levels ranging from the jungles of the Pacific to the streets of the Orient. There will be a variety of options and customisable match parameters available including selection of Weapon Sets, Friendly Fire, and Time Limit options. Players can find and join games using the EA matchmaking service and will be able to choose from a selection of Axis and Allied soldiers. Once play begins, soldiers can communicate with voice chat using a USB headset for more coordinated team play or taunting competitors.

Need for Speed Underground will allow up to four players to race online in all four of the game's driving modes: drag racing, sprint racing, circuit racing, and drift racing. Players will be able to take the cars they've customized offline into the online arena to show off their tricked out rides and show up the competition. A comprehensive ranking system tracks the top 100 riders, top lap times, and more for the ultimate in bragging rights. Need for Speed Underground will also offer cross-platform online play, allowing PC and PlayStation 2 gamers to seamlessly compete online for the first time.

SSX 3 will allow players to get on board and compete online in a range of two-player cooperative modes across Backcountry, Slopestyle, Big Air, Super Pipe and Race events. Players will be able to take their customized characters online, meet their opponents in the lobby and chat together via a USB headset before heading out on to the treacherous mountain peaks.

The Sims Bustin' Out will feature two-player cooperative gameplay online, which lets players work their way through any of the game's unique career paths. The game will also feature an online trading system that will allow players to swap unlockable social interactions such as Pull Finger and Moonwalk or objects like a Climbing Wall and DJ Booth. In addition to bestowing bragging rights, these wacky social interactions and highly coveted objects will also affect the gameplay. Online play will also feature a lobby where a matchmaker screen displays the astrological signs, genders, and personalities of other Sims, so that players can effectively choose their gaming partners. Since two Sims are better than one at getting the job done, online play will make it even easier to accomplish goals, satisfy motives, and get your Sims into trouble in The Sims Bustin' Out.
Companies: Electronic Arts
People: Gerhard Florin
Games: FIFA Football 2004 Medal of Honor: Rising Sun Need for Speed: Underground SSX 3 The Sims Bustin' Out